The Prepare, Observe, Move (POM) routine provides an easy way to remember the steps needed to safely move away from the side of the road…without stalling!

Check that the handbrake is on before you start the engine. You also need to check that the gear lever is in the neutral position.

You check the handbrake with a tug…

A quick pull will ensure that it firmly applied. To check that the gear lever is in the neutral position simply waggle the gear lever from side-to-side (tug and waggle!).

Check neutral with a waggle!

The switch has various positions – the first position switches power to auxiliaries such as the radio, the second position will switch on the ignition system and the warning lights will come on, the final position starts the engine.

As soon as the engine starts, let go of the key. This prevents the risk of damage to the starter motor.

POM – Getting the gear

With the engine safely started, you are now ready to select first gear.

First, press clutch pedal down to the floor.

It’s important to keep the clutch pedal pressed down while the gear is selected. Pressing the clutch down disconnects the engine from the wheels when the gears are selected – without this either the gear-lever would jam or the car would jerk forwards.

Next, select first gear by pushing the gear lever to the left and then sliding it forward.

Use the ‘palming’ method to ensure that you always select first gear correctly. The palming method is not compulsory but you are much less likely to get into the wrong gear if you use it.

But ultimately it doesn’t matter how you hold the gear lever as long as you can select the gears easily without making mistakes.

It’s worth noting that you are not driving a bulldozer! The controls will respond to a light but positive touch – there is no need to ‘ram’ the gear lever home.

Having selected your gear, you should “Set the gas”.

Some modern cars don’t require the gas to be ‘set’ before moving off but the car you will probably be driving after you’ve passed your test probably will. so it’s a good idea to get into the habit of setting the gas while you’re learning.

What is ‘setting the gas’?

Press the gas pedal down about the thickness of a pound coin. This will result in a lively ‘hum’. Now hold the pedal still. 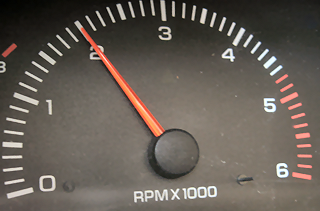 It takes practice but don’t worry, you’ll soon get a ‘feel’ for how much to press the gas pedal.

‘Setting the gas’ is a process that you will always do before the car moves, but as your skill develops you will be able to do it instantly and instinctively at the same time as the clutch comes up (see below) – when this happens you will not need to press the pedal until just before the car moves; for now though, it’s better to concentrate on one thing at a time and learn each part of the routine separately.

So far, you’ve checked that the handbrake is on and that the gear lever is in the neutral position, started the engine, selected first gear and set the gas. 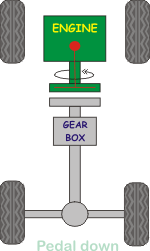 But although the engine is running and the gear is selected, you are not yet moving! This is because the clutch is still pressed down to the floor. You will remember that when the clutch is down, the link between the engine and the driving wheels is broken, as shown in the diagram on the right…

The next job is to start the process of connecting the engine to the wheels.

Bring the clutch pedal up slowly until you find the biting point and then hold it absolutely still.

The biting point is the point at which you hear a drop in the engine note (and/or see the needle of the rev-counter drop); the engine is slowed down slightly at this point because the brakes are holding the car back as the engine tries to make it move.

The biting point is usually found when the clutch pedal is about half way up.

Hold both feet still when you find the biting point otherwise the car might move forward prematurely or the engine could stall. The skill of holding the clutch at, or around, the biting point is one of the most important things that you will learn during your lessons, namely – this skill is usually described as ‘clutch-control’. You will learn more about clutch-control in your next few lessons. It will be the foundation for slow speed manoeuvring.

The car is now ready to move off but you must first make sure that the road is clear and it is safe to move; this means checking for traffic and other road users and deciding whether a signal will be needed.

As with setting the gas your clutch skills will improve – when you are skilled at using the clutch the ‘Prepare’ element of the POM routine will often be completed at the same time as the ‘Observation’.

With thanks to Driver Active – all my pupils get free access to all the articles on this website!