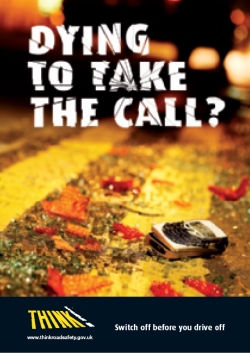 A substantial body of research shows that using a hand-held or hands-free mobile phone while driving is a significant distraction, and substantially increases the risk of the driver crashing.

Drivers who use a mobile phone, whether hand-held or hands-free:

They are also four times more likely to crash, injuring or killing themselves and other people.

Using a hands-free phone while driving does not significantly reduce the risks because the problems are caused mainly by the mental distraction and divided attention of taking part in a phone conversation at the same time as driving.

The penalties were initially a fixed penalty of £30 or a fine of up to £1,000 if the offender goes to court (£2,500 for drivers of goods vehicles or passenger carrying vehicles with 9 or more passenger seats). From 27th February 2007, the penalty for using a hand-held mobile phone whilst driving increased to £60 and three penalty points added to the drivers’ licence.