The ten most common ways to fail a driving test

The number of ways today's learner drivers can fail has multiplied greatly since their parents took their driving tests – and contrary to what our elders and betters like to tell us, the test hasn’t got easier.

The high density of traffic on the roads today, complicated traffic systems plus the hundreds of rules and regulations that are designed to keep us safe on the roads mean that learning to drive – and passing a driving test – is tougher and more complicated than ever.

One reason for failing that you won't see below is feeling nervous. Being a bit tense before your driving test is normal but you have to keep your feelings under control. Nervousness by itself won't make you fail, (everyone feels a bit nervous before taking a driving test), but if you can't push your nerves to one side and focus on your driving you may well make a silly mistake. How to beat driving test nerves.

Looking for an early test date? Click on the image below to save £3 and sign up to the test cancellation service that I use with my pupils. It never fails to find a really early test date 🙂

* Urban myth * - Examiners don't have quotas. If you drive well enough you will pass, it's as simple as that. It doesn't make any difference if your test is at the beginning or end of the month, what time of day it is or the phase of the moon.

How the driving test is marked

You've probably heard of minor and major faults.  They’re now termed ‘driving errors’, but the concept is the same: the number of errors you get – and their severity – dictates if you pass or fail your test so it’s a good idea to know what your driving examiner is looking for. 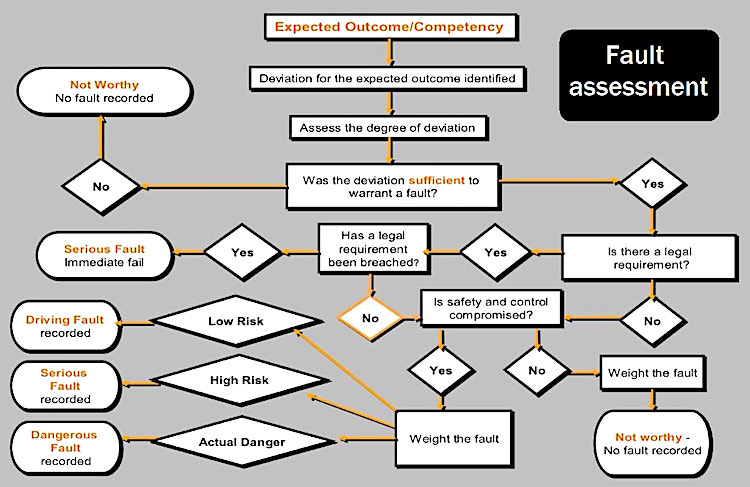 Think of a typical driving test error and follow it through using the flow chart above. You can see how something as simple as a stall could be assessed as either 'not worthy', a driving fault, a serious fault or even a dangerous fault

You can make up to fifteen driving errors and still pass - although anyone who makes fifteen mistakes in a 40 minute driving test probably shouldn't be driving on their own anyway. But just one serious or dangerous fault will result in the examiner saying 'sorry, you haven't met the required standard on this occasion'.

The difference between driving errors and serious or dangerous faults

The ten most common reasons for failing a driving test - examples

The Drivers and Vehicle Standards Agency (the DVSA) have published the top ten reasons for failing a driving test between 2006 and 2021.

Over the years, the same errors turn up with depressing regularity. In 2020/21 the top ten were:

1. Observation at junctions. Not looking both ways before emerging (especially not looking left when emerging left); failing to look into the road you're turning into before you turn. And remember, roundabouts are junctions, too.

This article explains everything you need to know about observations at junctions.

2. Mirrors. Failing to check your mirrors BEFORE changing direction or speed - or failing to act on any information your mirrors give you (e.g. a car behind overtaking you) is a really common driving fault and results in many 'accidents' on the road.

3. Turning right. Waiting to turn in the wrong place and holding up traffic behind you, waiting too far right and getting in the way of traffic coming towards you, not looking into the road you're turning into and making an approaching vehicle slow down to let you turn are all very common mistakes.

4. Response to signals (traffic lights). Failing to stop at a red light, moving off before the light goes green, failing to stop at an amber light when it was safe to do so, not reacting appropriately to green filter arrows and even stopping at a green lights are, sadly, very common.

5. Poor steering. Although their are no rules about how to hold the steering wheel or how to use it (you CAN cross your hands or even drive with one hand providing you don't lose control), letting the steering wheel spin back on its own after turning a corner, steering too late or too soon can cause danger to other road users or pedestrians.

6. Response to signal (traffic signs). The obvious one here is exceeding the speed limit. Some unsuccessful candidates have also tried (or even succeeded!) in turning into roads marked 'No Entry' or ignoring signs that indicate priority ('Give Way to Oncoming Vehicles etc)

7. Response to signals (road markings). These are some of the most common reasons for getting a fault in this section:

8/10. Moving away safely and in control. Forgetting to use first gear, rolling backwards or failing to check blind spots before moving away all crop up regularly.

9. Positioning (normal driving). The examiner is expecting you to:

You can see a very full explanation of all possible driver errors, including lots of useful examples, on the Government website.

As you can see, the errors being made are all pretty basic ones.

That said, it’s worth remembering that the majority of these are deemed not serious; so unless you rack them up the way Roger Federer racks up tennis trophies, you should be okay.

This is the test cancellation service I use. It never fails to find an earlier test! Click on the image to get a discount!

How to avoid making one of the most common driving faults

The tips below don't just relate to the top ten reasons for failing but they will help you become a safer, more skillful driver in lots of different ways.

Observation at junctions. It’s no use driving up to a give way line, stopping and then assessing the road. If possible, you need to be looking at the traffic in both directions at least 5 seconds before you reach the give way, if not sooner. If everything is clear, you can simply slow down a little and pull straight out. This shows the examiner that you can drive smoothly and read the road ahead appropriately. If the junction is partially obscured and you can’t see the road, then stopping might be your only option. There’s nothing wrong with this, as long as you don’t wait too long at the junction and hold other people up. Move out as soon as a suitable gap in the traffic appears; hesitancy will count against you.

Reversing parking. Full details on all the reversing manoeuvers (including parallel parking, bay parking and stopping on the right) can be found here.

Misuse of mirrors. This is a common failing in learner drivers, usually because all your concentration is on what’s happening in front of you, with little left over for what might be going on behind. However, you always need to know what's behind you in case you need to slow down suddenly. If you need to brake sharply, it’s best to know if there’s anyone behind you who’s likely to run into the back of you, especially if it's a big lorry that takes a long time to stop! So look in your rear view mirror occasionally (and always whenever you approach a hazard), and use your side mirrors before you overtake or change your position in the road. More info here.

Poor steering. You won’t be failed for crossing your hands on the steering wheel but you have less control on your steering when this happens. It’s best to get into the habit of using the push-pull technique, even if it is a bit awkward, because you keep the control even around sharp corners. Furthermore, you shouldn't take your hands from the wheel for any longer than necessary. So driving with one hand on the gear stick isn’t an option.

Incorrect use of signals. Every learner does it: takes a turning, or an exit on a roundabout, and expects the indicator to self-cancel (you’re even taught to leave it to self-cancel)... and then it doesn’t. Before you know it, you’ve lured everyone behind you into thinking you’re taking a small side street to your left, and they’re mildly annoyed to find you’re actually not. A good way to avoid this is to nudge the indicator back into the middle (neutral) position as you realign the steering wheel.

As for Mirror, Signal, Manoeuvre, the name says it all. Check your mirror and only then, if it is SAFE to move out, can you signal your intention to move. Don’t whack your indicator on and expect someone to let you out – it’s arrogant and will probably lead to a serious driving fault.

Poor speed control. It really is worth your life to stick to the speed limit – or, at least, someone else’s life. Speed limits are there for a reason, and yes, there are times when we’re in a rush or it’s simply not practical to stick to the limit. But a driving examiner needs to know that you can stick to the limit, and that you can tell when a limit has changed and act appropriately (it’s surprising how many people fail to notice the big red and white signs with huge numbers on, but they do).

It’s also important you don’t go too slowly. This turns you into a hazard for other cars rather than reducing the chance of you encountering hazards yourself, and is also excruciating to behold. This holds especially true at junctions. Yes, it might be a busy road, but that doesn’t mean you can wait ten minutes for a gap big enough to fit you and the fifteen cars waiting behind you. If you see an opportunity that’s safe, go for it. Don’t get bogged down in being too careful. That way madness lies...

Moving away safely. When moving off, the POM method should always be used. When moving off on a hill ALWAYS use the handbrake unless your car is fitted with hill start assist and you know how to use it. Wait until there’s a big enough gap between you and any approaching vehicles before moving off. Remember that you will be moving off slowly and approaching vehicles could be coming up the hill fast.  Take careful observations before moving off  - don't rush - and remember that objects in your rear view mirror may be closer than they appear to be. Delay your gear changes as oyu drive up the hill.

Right turns. If you indicate to turn right and stop in the middle of your lane while you're waiting for a gap in oncoming traffic you'll block the road for people behind you who may wish to carry straight on. If the oncoming traffic flow is particularly heavy this could mean you’re keeping them waiting for a long time.

Also, don’t forget to check your right mirror before you turn. Someone might have flashed to let you go, but they might not have seen the motorcyclist coming up on your right and if you don’t check your mirrors, you won’t see them either.

If all this makes you a bit nervous. here’s a last little fact. The current national pass rate for driving tests is only 43%, with most learners needing to take their test 2-3 times before passing - so if the worst comes to the worst and you fail, be comforted in the knowledge that you’re still in the majority. Work hard, listen to your driving instructor and you'll do it next time!

Got a question about learning to drive, the driving test or the theory test? Get in touch and we'll help!