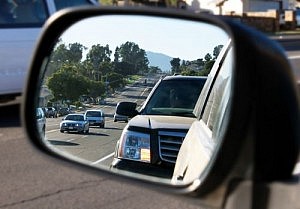 We all get frustrated in traffic at one time or another.

However, simply because traffic is moving slowly doesn’t mean that we can’t let another driver into our lane. One additional car in front of you isn’t going to make you arrive any earlier or later than you already would have. So the next time someone is waiting to merge, be the kind person who lets them in.

When you drive conscious of other driver’s needs, you won’t get nearly as angry. Put the other cars on the road and their needs ahead of their own. If you let people in, you are less likely to get frustrated by traffic. This is a simple kindness that can help you keep your calm while driving.

Always leave enough room between you and the vehicle in front of you for someone to merge, whether there is another car waiting to merge or not. That way, you are never in trouble of being cut off, and therefore you will be less likely to get angered while driving. Carpool whenever you can; fewer vehicles on the road means less traffic.

Once a week, when traffic is at it’s worst, let a car go in front of you. Next time you are stuck in terrible traffic, make a conscious decision not to get angry or upset. Getting angry does not help the traffic move faster. Use the extra time on your hands to think of something kind you can do for someone later on that day.