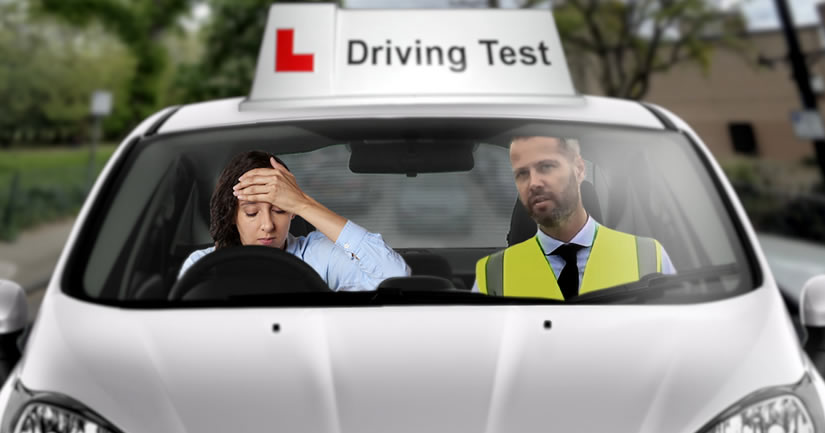 Many thanks to Diary of an ADI for permission to reproduce this article.

Do I fail if I stall on my test?

No. Not automatically. It depends on many things, like where you do it, how many times, and how you deal with it. Stalling is NOT automatically a serious (or “major”) fault.

If you stall once when moving away or stopping, then as long as you start the car safely and move away or stop correctly afterwards, the worst that will happen is that you’ll get a driver fault (and you may not even get one of those). However, if you repeatedly stall when moving away, as a rough guide you’ll get away with it maybe two or three times (a couple more if you’re lucky) until the examiner decides it is a real problem – then you’ll get a serious fault for it.

If you stall at a junction a lot depends on what is happening behind and in front of you, and the delay, danger, and inconvenience that results. For example, if you want to emerge from a junction, stall, and miss a gap in heavy traffic – which causes inconvenience to those behind you – then you can easily get a serious fault.

If you stall in the middle of a junction (i.e. when turning right), the risk of inconveniencing others and causing a dangerous hold-up increases dramatically. It is possible to recover completely from this and come out of it with only a driver fault (and maybe not even one of those), but a serious or dangerous fault is also possible.

Much also depends on how you deal with it.

Will I fail if I stall twice?

It depends on how and where you do it. The short answer is no. However, stalling is a control issue, and you’re being assessed on how you control the car as part of your driving test. Any stall is bad and should be avoided, but if it happens just deal with it as I’ve explained elsewhere in this article and keep your fingers crossed.

If you stall, you can’t undo the fact that you’ve done it. But you can prevent it snowballing into other faults.

If you stall more than a couple of times in the same situation – when moving off, for example – then you really can’t control the car and are probably chasing down a fail. You can’t blame nerves – the examiner is marking you on what he or she sees. As I say, avoid stalling.

If you stall more than a couple of times, but it’s in different circumstances – let’s say once in a queue of traffic, once during a manoeuvre, and once right at the start of the test – you just need to keep your fingers crossed and not let it worry you.

I keep stalling on lessons and my test is next week!!

If stalling is a problem on your lessons, you aren’t ready for your test. You need to sort the problem out and not look for ways of “getting away” with it. You should take your test when you are properly ready for it, not just because you want to.

What should I do if I stall?

Above all else, don’t panic!

Your absolute main priorities are to get the car started safely and to move it promptly out of the way, maintaining control throughout.

Your priorities are NOT to automatically put the handbrake on and get it into neutral. Sometimes, that’s what you will have to do – but other times it will make the situation much worse by causing delay (if you cause a hold up, that’s far more serious on test than a simple stall that you quickly and safely deal with). You have to decide at the time.

Do I need to use the handbrake if I stall?

No. Not necessarily. Sometimes, putting the handbrake on (and/or selecting neutral) just adds to the delay. You must do what is appropriate for the particular situation you’re in.

If you’re likely to roll back, or roll forwards into danger, then use the handbrake. The examiner’s brief is that you deal with things safely and maintain control if you stall – not that you systematically use the handbrake if you do.

Should I go into neutral if I stall?

No. Not necessarily. However, if you are going to start the engine with the car in gear, make bloody sure you have the clutch down. If you don’t, the car will move forward – and that’s almost certainly a guaranteed serious or dangerous fault because you are not in control and you are not safe.

Should I put the handbrake on an go into neutral every time I stall?

As I explained above, this may add to the delay and allow a dangerous situation to develop, so the answer is no – not automatically, and not every time.

Some might argue that because you might panic, then you should go through this routine for every stall. But there’s no perfect answer to this one other than to avoid getting into the situation to start with. Advising learners to always go handbrake-neutral is a bit of a cop-out.

Every situation is different – and plenty of them are such that if you did go through the full handbrake/neutral routine then it would push you into a fail, whereas using another approach would not.

Should I stop if I stall?

No. Not necessarily. Slamming the brakes on when it isn’t necessary could quite easily cause someone to go into the back of you at a busy junction if they see you start to move. It’s hardly much consolation knowing it was technically their fault if they’ve written off your car and given you whiplash (and are probably blaming you anyway with their insurer).

You have to decide whether you need to stop or not depending on the individual situation.

Why did I stall?

A lot of possible reasons, including:

It could be any combination of these.

Before you try and move off again, make sure that you’re in the right gear. That eliminates one possible cause.

How should I handle a stall?

It really depends on the situation. You can use the full handbrake/neutral procedure sometimes, but there are other cases where just using the handbrake – or even neither handbrake or neutral – is going to be the quickest and safest way out of a stall.

In the middle of a busy junction, for example, if you start to move forward but then stall, you could quickly start the engine while the car is still moving as long as you don’t roll into a dangerous position. Keep the clutch down as you restart it.

How do the examiners assess a stall?

DVSA SOP DT1 (guidance for driving examiners) only gives only one example: 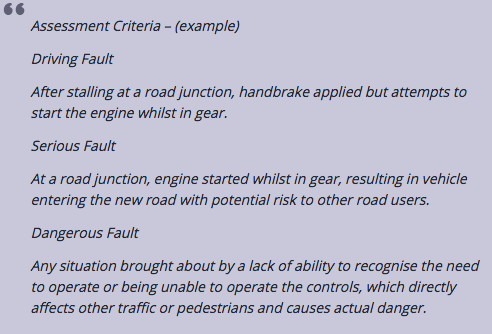 This requires interpretation, as it doesn’t cover every possible situation.

To start with, serious and dangerous faults are easy to identify. If the car moves into the new road – whether in gear or not – it is marked S or D. Which one depends on the risk – potential (serious) or real (dangerous).

The division between a driver fault and a serious fault requires more consideration.

If the candidate stalls and restarts the engine with the clutch down and still in 1st gear, as long as there is no risk to other road users, this may not even attract a driver fault. It is perfectly OK to do it, and it doesn’t matter if they don’t use the handbrake either, as long as they’re in control.

If the candidate does the above, but has the clutch up/in gear and the car lurches, as long as it doesn’t enter the new road and there is no other risk or danger, it may only attract a driver fault – it is not automatically a serious fault. If the candidate hasn’t used the handbrake then that pushes it more to the serious side (this is why some instructors blindly teach the handbrake-neutral routine).

Of course, if the candidate does the same thing twice – lurches forward without realising the clutch is up, or stalls due to being in the wrong gear – then they’re edging very much towards the serious side.

Hopefully, you can see the point here. If you are a competent driver then you can restart and continue as if nothing happened without using the handbrake or going into neutral. But if you stall and get any of the following behaviour wrong, the meter starts to rise – how far it goes depends on how much of a hash you make of it! Trying to cover all scenarios by just going handbrake/neutral creates its own problems.

Again, it is important to stress that every situation is different and has to assessed at the time it happens. What is a driver fault one time could be a dangerous fault another, just because of who is on the road behind and in front.

It depends on where you do it, but yes – it can easily be very dangerous.

Cars behind will see you start to move, and will expect you to move off normally and accelerate through the junction or crossing. If you stall they might not see you stop and could easily drive into the back of you. Rear-end shunts, as they’re called, are one of the most common bumps news drivers (and driving instructors on lessons) have to put up with. And even if the car behind you manages to stop, the one behind him might not – and it is all because you stalled.

Admittedly, from an insurance perspective it will almost certainly be considered as the fault of the driver behind who didn’t see you stop, but that’s no consolation if your car is all banged up (and your own insurance might still rise as a result, because you’re going to have to lodge a claim). Remember that even minor damage to an old vehicle might see it get written off by the insurers, and you’re not likely to get the same money you paid for it.

You might also cause serious problems if you stall in the middle of a junction as the lights change, and traffic starts moving from the other sides.

Stalling when moving away from a parked position tends to get marked as only a driver fault (under “control” on the marking sheet). However, doing it repeatedly means that you can’t control the car and it usually becomes a serious fault once it is clear you cannot move off reliably.

Can you stall in neutral?

No. Not unless there’s something wrong with your car. Learn how the clutch works, then you’ll understand.