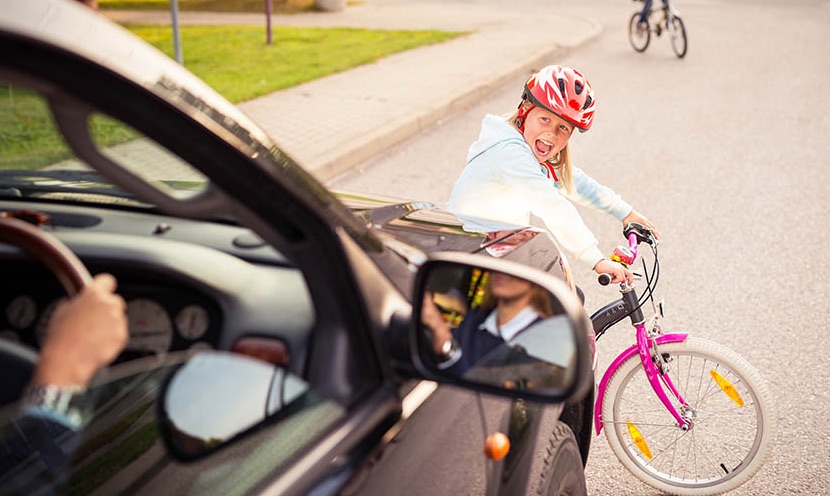 About one in every three driving tests involves a controlled, ’emergency’ stop.

Your examiner will ask you to stop in a safe place then say: ‘when I say ‘stop’ and hold my hand up like this, I want to stop the car promptly and under control. Move on when you’re ready.”

Although this isn’t included in every test, you still need to know how to do it – just in case you have to do it for real one day!

Why you need to do it

You should minimise the chances of having to do an emergency stop by keeping a safe (two or four second) distance from the vehicles in front of you, drive to the conditions, plan your journey carefully and anticipate the actions of other road users and pedestrians.

But the chances are that one day someone is going to do something completely unpredictable and force you to stop the car very quickly.

In such a situation, every moment counts!

How to do a controlled stop

In a real life emergency you wouldn’t have time to make your normal safety checks. If you checked your mirrors before braking as you would do normally, for example, the delay could be disastrous.

So it’s stop first, look later. If the vehicle behind you hits you, it’s their fault for being too close or not paying attention.

The examiner on the driving test will expect you to:-

Controlling the car and stopping quickly

Control when stopping quickly is easy if you follow the two basic rules below:

Pressing the brake before the clutch helps you to keep control, especially as an inexperienced driver. One theory for pressing the footbrake first is that ‘engine braking’ helps to slow the car down, however, in reality this effect is negligible (unless you are stopping on an extremely slippery surface like oil or ice).

A more important reason in the early stages of learning is that it is that you must aim to get the brakes ‘biting’ before the clutch is pressed. Pressing the clutch down a fraction of a second before the brake can cause a brief ‘surge forward’ which in turn can make an inexperienced driver hesitate for a fraction of a second – in an emergency every moment counts – at 50 miles per hour you will cover well over two metres in just one tenth of a second!

You can time your use of the pedals by thinking or saying the words ‘brake-and-clutch’ to yourself at a normal speaking pace. Doing this will also help to keep you calm because it will occupy your mind with useful information. The best results are obtained when you shout the words ‘brake and clutch’ out loud – but you might end up laughing or getting strange looks from pedestrians (especially if the car windows are open!).

As you think the word ‘brake’, press the brake quickly, firmly and progressively; the word ‘and’ provides a pause before finally pressing the clutch.

Keeping you hands on the wheel is important because in much the same way that you are thrown forward during harsh braking (hence the need for seatbelts), much of the car’s weight is thrown forwards on to the front wheels. This means that you need maximum control of the steering because the rear of the car becomes lighter and the tyres are more likely to lose their grip (causing the car to skid).

Once you’ve stopped, you should get ready to move off again.

It’s probably best to apply the handbrake. Select first gear, take very careful observations all round the car and move off when it’s safe.