Although there are many conventional T-junctions and crossroads on dual-carriageways, motorway-type slip roads are becoming more common.

When entering a dual-carriageway from a slip road you will use the ‘acceleration lane’.

The acceleration lane is an extra lane on the left for use when building up your speed before merging with traffic on a dual-carriageway so that you can join the flow safely.

The routine for joining from a slip road is:

Even though it should be obvious to other drivers that you are intending to pull out, a signal is useful because not everybody is as alert as they should be. The picture above shows how NOT to do it! The driver of the silver car is pulling out without signalling – by doing this you risk upsetting others or taking the ‘half asleep’ drivers out there by surprise.

Watch for a gap:

You need to assess the traffic as early as possible as you approach and look for a safe gap. Once you have identified the gap, concentrate on the car that you are going to follow (not the car that you intend to pull in front of).

Use the slip road and acceleration lane to adjust your speed so it matches the traffic in lane-one of the dual-carriageway (the lane that you will be moving into).

Too fast and you risk getting too close to the car ahead; too slow and you will inconvenience following traffic.

When thinking about your speed you must be aware of the length of the slip road – along slip road will allow you to get up to quite a high speed, however not all slip roads are long, especially on dual-carriageways in town. if you have a short slip road you will need a much bigger gap in the traffic, or alternatively, you will need to accelerate hard (we don’t recommend hard acceleration).

Just before moving into position in lane-one it might be necessary to have a quick glance over your right shoulder. There is a possibility that a vehicle may be hidden in your blind spot. But be careful – this is just a QUICK GLANCE.

You might be travelling as fast as 70 mph, this is approximately 33 metres per second – so you need to look where you are going! Look for speed limit signs, on a dual-carriageway the National Speed Limit sign means a maximum of 70 mph.

Remember the basic rule for ’emerging’ – only pull out if you are sure that it is safe and that you will not inconvenience other drivers.

Joining from T-junctions or crossroads

If you join a fast dual-carriageway from a T-junction take extra care when judging the speed of traffic already on the main road. You will need quite a while to build up your speed from a standstill, this means that you will need a much bigger gap than on slower, two-way roads.

Some left turns will have acceleration lanes; use the procedure described above for a slip road if this is the case.

If you are turning right into a dual-carriageway, wait until both sides are clear unless there is a large gap in the central reserve area. If the gap in the centre is large enough, you can treat each carriageway as a separate road. 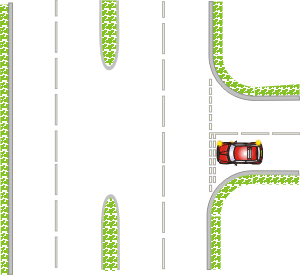 The car in the diagram on the right would not be able to wait safely in the central gap. While it could probably fit into the gap if it positioned at an angle, it would obstruct the road for any traffic that wanted to leave the dual-carriageway, it would also be difficult to see the road properly from that position.

The vehicles in the picture below show how much space you need to stop and wait safely in the central gap.